Although cats frequently are stereotyped as aloof and self-contained (some cats indeed are), many cats enjoy play time! Whether I bring a new toy home or simply recover one from beneath the couch, Charlie in particular reacts as though it is his birthday, Christmas, and Halloween all rolled into one because he is SO THRILLED that I am giving him a toy. Even Garrus drops his usual reserve and makes some spectacular leaps while chasing after one of his favorite toys.

Boudicca has never been a very playful cat with a high prey drive. When she was younger, she would chase the red dot and half-heartedly bat at toys, but now that she is a senior who will be 18 in May, she has lost most interest in playing. She will occasionally demonstrate a willingness to investigate puzzle toys chiefly because she wants treats. Garrus and Charlie, on the other hand, love to play. This is especially true for Charlie, who can best be described as a busy, happy-go-lucky furry toddler. (He is, after all, two years old, which makes him the feline equivalent of a college student.)

Both of the boys have their unique preferences. Garrus prefers the wand ribbon toy (I think it’s actually called a Cat Dancer but that term has always made me giggle) and the laser pointer, especially if there are treats beneath the red dot. He will occasionally bat around toys that we have lying around. (During a particularly active play session, my living room looks like a daycare center. Charlie also has developed a habit of leaving his toys in odd places around the house.) Garrus also is intrigued by puzzle toys and is generally more willing (and brave enough) to explore new things, like a big paper bag.

Charlie, as I mentioned earlier, likes to be busy. While he is not really mischievous, he very well could be if he ever became bored. This is one of the many reasons why I am so grateful that we fostered and adopted both boys. Charlie is so much happier with a cat buddy and is generally appreciative of having a playmate. In between naps and being cute, ambushing, chasing, wrestling, and playing tag with Garrus fill his daily calendar. However, Garrus does not always want to play, so when that happens Charlie has to entertain himself. While both boys immediately claimed the cat tower for themselves (Boudicca prefers boxes), Charlie regularly runs up and down the tower, either chasing Garrus or inventing a game for himself. (The rules of these new games are not always clear to me. In fact several of them appear to have fluid parameters.) Having a tower gives Charlie a place to exercise, hide in a cubby if he feels insecure or just wants a cave-like environment, a convenient perch, and his preferred sleeping spot (a high platform). 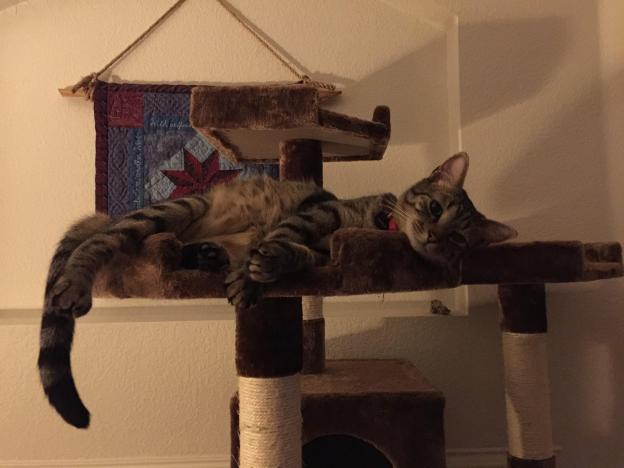 Within days of erecting the tower, Charlie tore off all three of the toys that had been attached to it. (I cut off the remaining elastic string on both the tower and the toys so that he could not chew on it.) For some reason, these are his absolute favorite: two fuzzy brown mice and a ball. 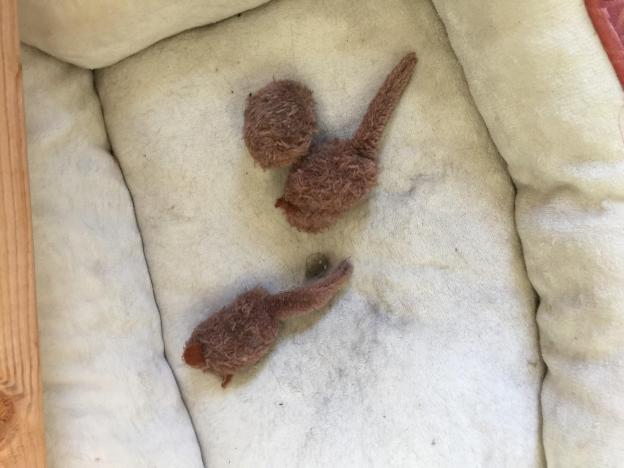 Charlie had actually left one of the mice in the bed. I moved the other two toys there to take this photo. He was very curious about what I was doing and nearly bumped into my phone and photobombed the shot.

My friend Tracey proposed a theory that some cats are more “birdy” and others are “mousy”. “Birdy” cats like toys that they swat or chase in the air while “mousy” cats prefer to stalk toys on the ground. This makes sense to me, and I think a fair number of cats fall into one of these two categories or are a blend of them. Garrus may fall more into the “birdy” cat category while Charlie is “mousy”. Where does that leave Boudicca? She’s in the final category: lazy and/or googly.

How many toys does my little pounce have? After fishing them out from under and behind furniture (the boys looked on, rather bewildered and intrigued), I found most of them. Although I originally bought a pack of eight springs, I only found four. I do not know where the others went. I suspect gnomes kidnapped them. 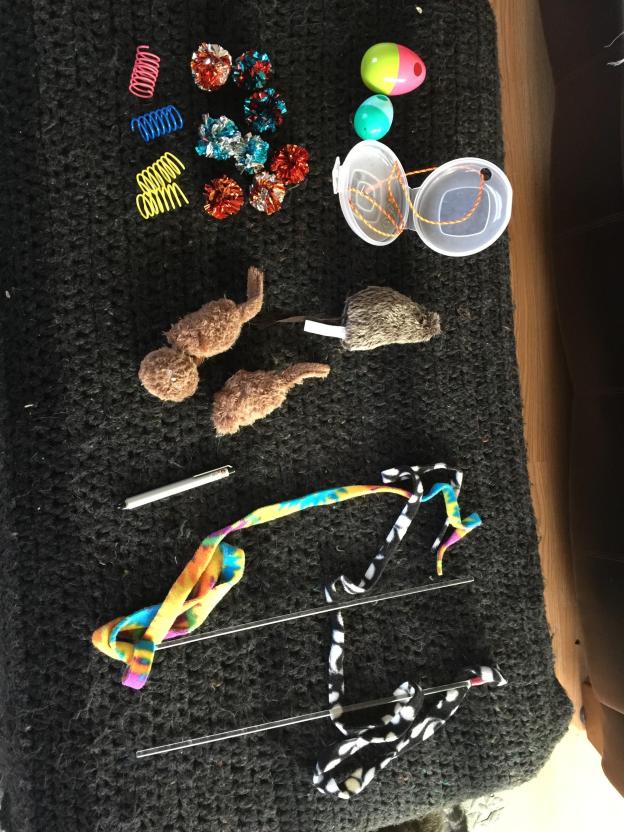 Note that I do not have any feathery toys in my collection. I don’t have anything against feather toys; some cats like them very much. However, Mr. Charlie demonstrated that he will eat the feathers and that makes him sick. The vet told me no more feathery toys for him. 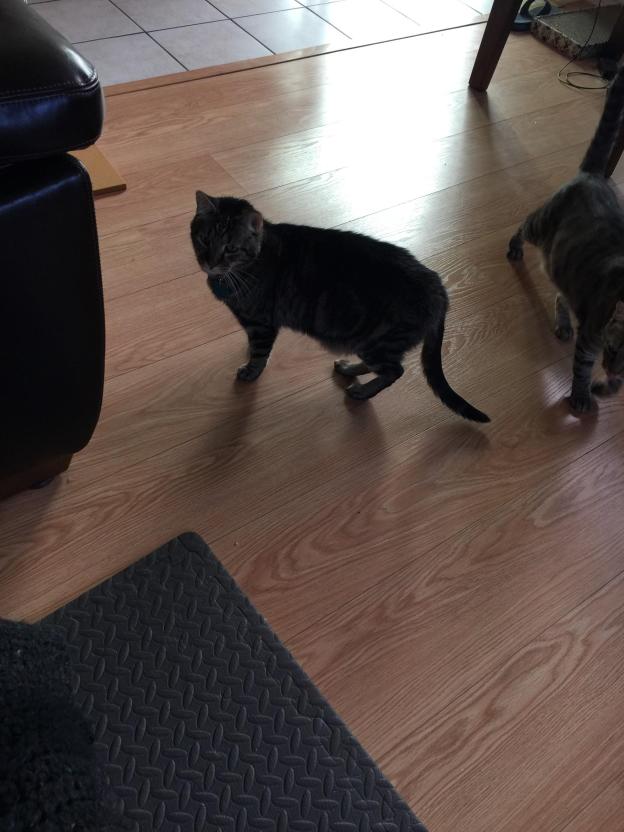 Garrus stared intently at his wand toys as I lay them out for the above photo. He was totally game to play. So we did. Charlie joined in as well. 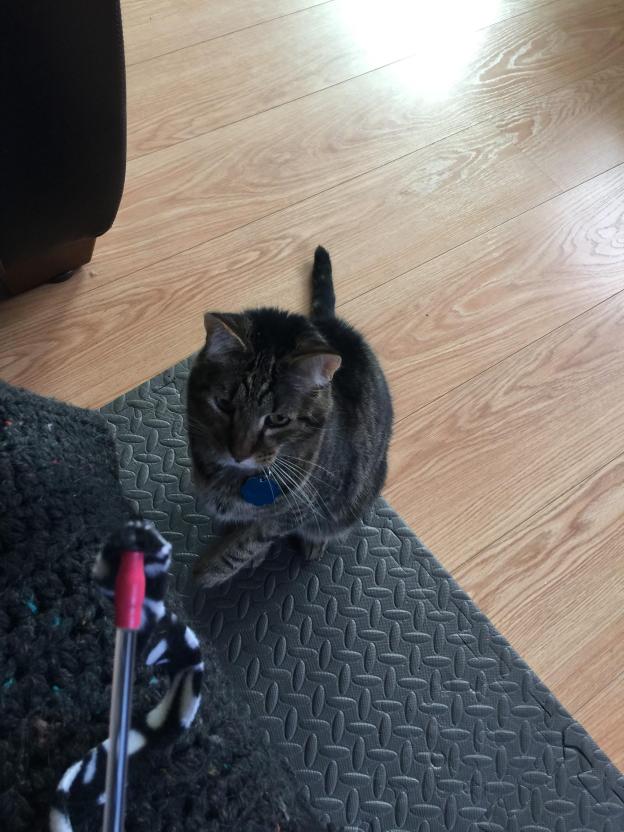 Here Garrus pauses before he executes his trademark swat and pounce move. His face is a study in concentration.

Because we have all these toys, we collect them and put them on the platforms the cats generally don’t use. This habit started inadvertently; I believe I needed to vacuum the living room and the toys were everywhere, so I put them on one platform to get them out of the way and apparently forgot about them for a bit. Charlie, however, discovered them as soon as I put away the dreaded vacuum monster. I watched him fish out toys he wanted to play with and either swat them to the floor or carry them in his mouth. (Garrus has selected toys using his paws this way but does it less often.) Charlie does this very consistently with his fuzzy mice and ball, which I now put on the uppermost platform. I cannot tell if Charlie is slightly offended when I put them up there or just feels strangely compelled to throw all his toys onto the floor. Unfortunately, I haven’t been able to catch Charlie doing this with my camera yet but I will keep trying. It’s pretty adorable and usually involves a squeaky commentary. 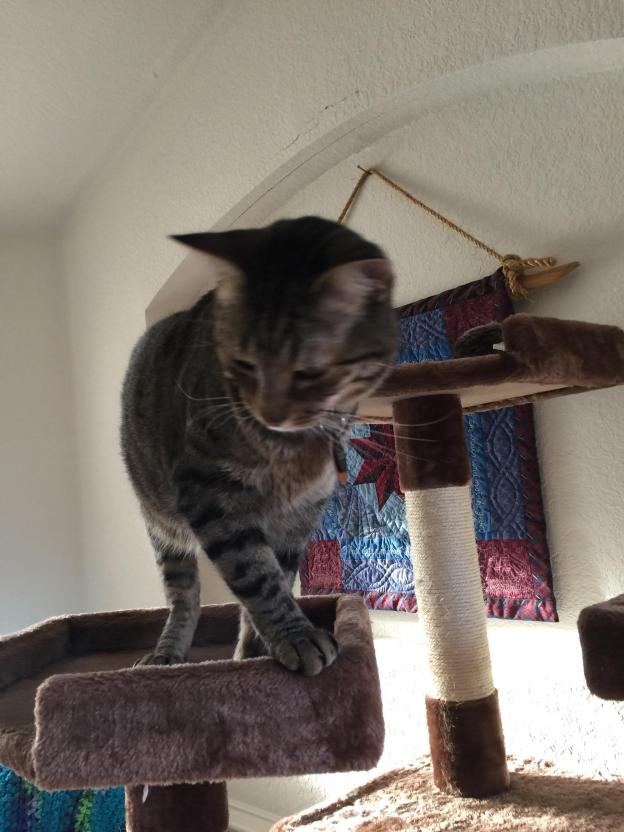 Charlie danced all over the platforms, trilling and sniffing all his toys intently, as though personally checking that I returned them to their proper spot.