I first met Tink in November 2016. He and his buddy Pan were the first cats fostered at the Pflugerville Public Library. We had just started an awesome foster program in alliance with the shelter, and the library director, a huge animal lover and very experienced pet owner, asked for the “hard cases”, or cats that needed socialization or other help in order to find a home. Pan and Tink were exceptionally shy and skittish, so the library staff had their work cut out for them. As a library volunteer, I visited the foster cats and helped socialize them. At the time Tink was a true hidey cat but if presented with rubs, he immediately started to purr. He was a sweet cat that incrementally came out of his shell as long as Pan was around. Having a buddy cat nearby was akin to a security blanket for him. Tink could be quite affectionate and less shy, especially if given sufficient time to get to know someone.

While in foster care, Pan was adopted and returned more than once while Tink remained at the library. Every time Pan left, Tink regressed into himself, despite the valiant efforts on the part of the staff, who offered him lots of love and patience. Some cats prefer to be only cats while others prefer company; Tink was definitely in the latter camp and was noticeably lonely without his buddy. For no fault of his own, Tink, then only two years old, had spent 18 months in the shelter or foster care and had been adopted and returned three times, the last time in May 2017. The longest he spent with any owner was less than two months. So clearly he had not found his furever home yet. To make things worse, he was separated from Pan and regressed to his previous skittish, hidey cat self back at the shelter.

I met Aristotle in the summer of 2017, after he had been surrendered by his owner in June along with his two housemates. The housemates were fostered at the library. These cats were moody, skittish, and quickly shut down when overstimulated. They were apparently unused to being handled or even pet very much, and it was apparent that the trio had not received regular veterinary care prior to their appearance at the shelter. I learned that the two housemate cats fiercely guarded their food. Being less assertive and consequently the least dominant cat, Aristotle had apparently been bullied by his housemates and ate when he could before another cat chased him off. He came to the shelter very thin, with little appetite even after he was no longer exposed to bullying cats.

Animal services employees put a Feliway pheromone collar on Tink and Aristotle (a common practice), which seemed to help somewhat, but Tink definitely did better with a buddy cat. Knowing that Tink loved being with other cats, the shelter director introduced him to Aristotle. Thankfully, both cats immediately hit it off.

I got to know Aristotle that summer when I volunteered in the cat room. When I opened the pen door, Aristotle did not bolt out like many cats did. Occasionally, he was not in the mood to receive visitors; I suspected that he did not always feel well. It took some time for him to size anyone up and determine if he liked them or not, and this included volunteers. If he warmed to a volunteer, he would bunt their hands when they came to pet him. He also followed volunteers around the cat room, not in a clingy “don’t leave me” way but in a polite “I’m helping and supervising” manner, rub against their legs (or rather, polish their ankles), and liked to bat at ribbon toys, although he did not play with toys when I visited.

The cat room volunteers, including myself, were familiar with these cats and felt sorry for them. They had been in the shelter longer than cats usually stay, and poor Tink had spent most of his life in the shelter. While it was fortunate that the boys had one another, they definitely needed a respite and, with luck, a home. However, no one was interested in either of these two tabbies that summer. That is, until the Clear the Shelter event on Saturday, August 19, 2017…

Tink and Aristotle resided in a cat condo very similar to this one. Considering that there were two of them together, the boys were given a large condo with multiple cubbies, which were excellent hiding spots. 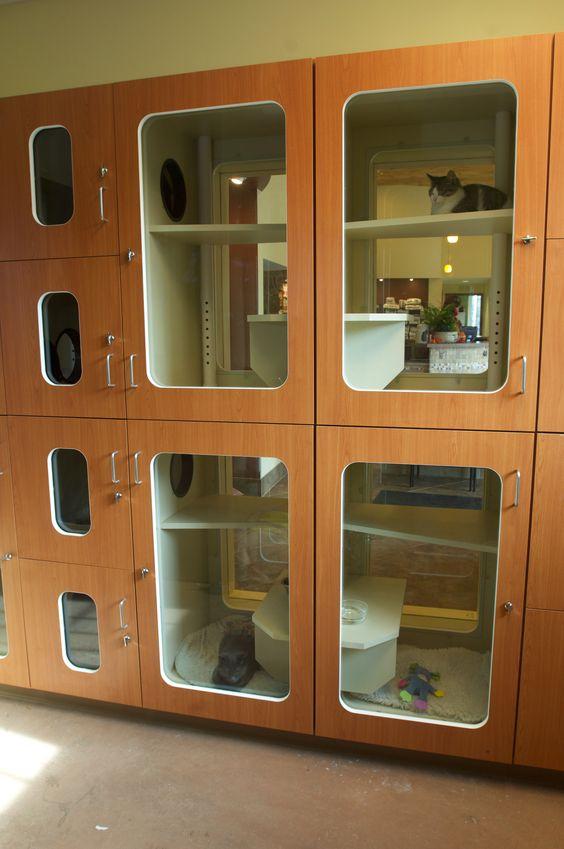 Stay tuned for Part Three! (If you haven’t already read it, be sure to check our Part One too.)