We received word yesterday that Mau was ready for us to pick him up at the Austin Pets Alive facility. Although we were not stoked about the drive downtown, we were looking forward to helping a sweet senior cat decompress away from the shelter and receive much needed dental care. 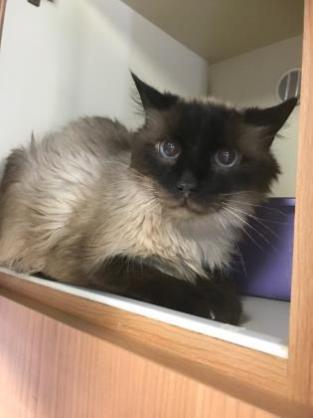 Here is his photo from the shelter. Because his pupils are so dilated, you can’t see how blue his eyes really are. You can also see his lovely colorpoint markings and medium-length fluffiness. 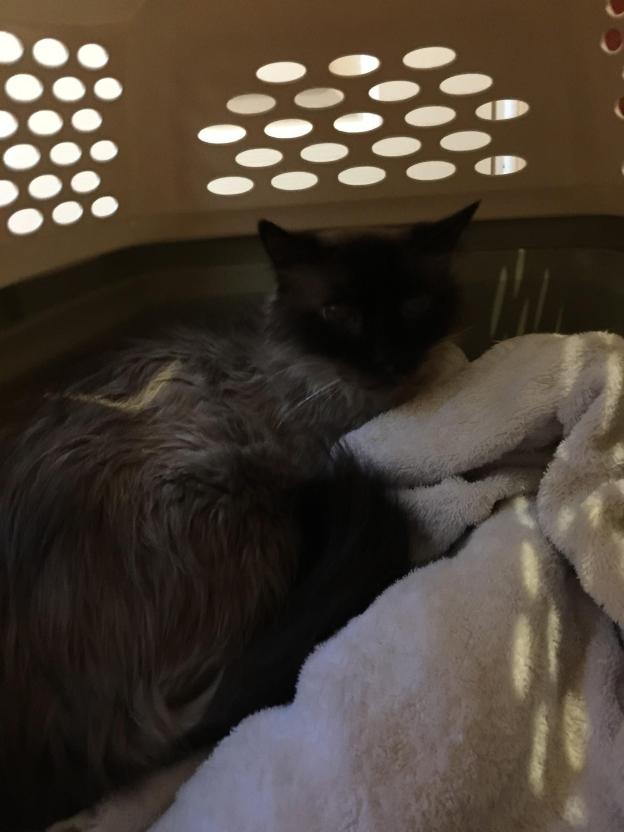 When we picked him up, he meowed pitifully. I’m pretty sure he wanted to lodge a formal complaint with the management when he was transferred between carriers. I’m sure he was completely discombobulated from being transferred to the shelter to APA to us. Once in the car, though, he was quiet. 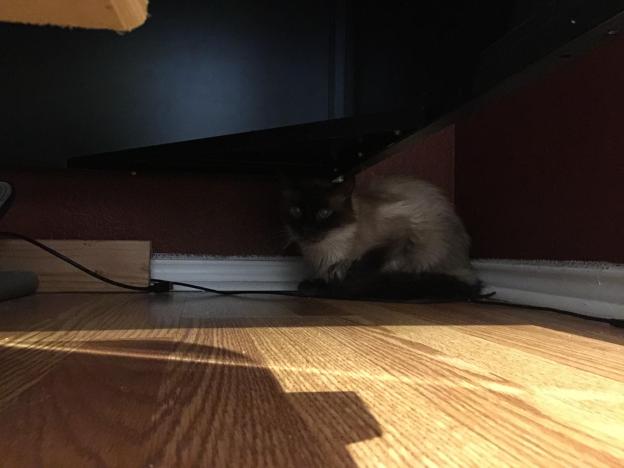 Aaron was magnanimous in loaning his office as a foster space. We set Mau up with food, water, a litter box, a bed (Boudicca’s pink one), a scratching pad, and a few toys. We visited but he remained put in the corner behind the desk. We spoke soothingly to him and sat on the floor but did not try to dig him out. If he wants to hide, that’s OK. Garrus and Charlie did that for the first couple of days in foster care.

We were pleased to note that he ate the wet food that APA provided for him, drank water, and used the litter box. At the shelter, he always snubbed wet food, preferring and apparently accustomed to eating hard food. We will continue to offer him both options. I will check on him throughout the day and hang out in the room with him, reading a book, so he can become used to my presence.

For their part, Garrus and Charlie knew something was up. As we moved the boys’ food out of the red room, Garrus came in and spotted Mau in the carrier before he left. He seemed mildly uneasy about the whole thing, but we also believe that he does not like change or the door shut. Charlie was puzzled by the shut door and investigated thoroughly, chirping. We made sure that Garrus and Charlie received ample visits and endeavored to disrupt their routine as little as possible. Of course, Garrus needed to go to the vet for his follow-up appointment so he won’t be happy about that either…