We were able to trim Garrus’ nails ourselves today with a towel over his face, a stress reducer to calm him, and patience! (He normally gets his nails trimmed at the vet’s office.) The stress reducer also made him more chilled out and affectionate (!) so he forgave us quickly and repeatedly asked for visits from both of us. He even started talking outside my office door when I was trying to do schoolwork, at which point I took a break and he came in for a desk visit. We were able to pick him up and have lap time with him – and he even purred in my lap! Such huge progress for our Gentleman Cat!

Last week was a rather hectic. I was out of town for several days, and during that time Austin Pets Alive! contacted me to schedule Mau’s dental surgery. Aaron dropped him off on Thursday evening and we picked him up the following day. All things considered, Mau’s surgery went well. Due to the severity of his dental disease and multiple abscesses, all of his teeth were extracted. Now we have a toothless cat!

When we brought Mau home, we gave him some peace and quiet by putting him in Aaron’s office for a few hours so that he could get his bearings. He walked a little unsteadily and seemed subdued, which was totally understandable, so we kept an eye on him. At the same time, he was not interested in having lap time or a snuggle.

Mau insisted on claiming the cat tree cubby as his R&R spot and being a hidey cat. Charlie seemed to be thrown off by Mau being so close to “his” spot on the platform above the cubby.

Mau seems to be recovering well after his surgery (or weird alien abduction, as it must have felt like to him). We’re continuing to give him wet food but no longer with antibiotics or other foul-tasting meds, which makes him a happy boy. We think that the antibiotics caused diarrhea, so we are giving him probiotics (Fortiflora) mixed into his food to counter that. Although he’s supposed to be on wet food for the immediate future, he still beelines toward kibbles and tries to eat them whenever possible. We separate Mau from Charlie and Garrus at feeding times or else everyone attempts to eat all other food except their own!

Mau appears to be feeling better and hides less in the cubby. Now we can all adore his handsome face!

Earlier this week Garrus had his follow-up to check his response to his steroid therapy. Dr. R was very pleased to report that his stomatitis had significantly decreased and only a very small amount of inflammation remained in the back right side of his mouth. Dr R wants to keep him on a low dose of steroids every other day for the next few weeks to continue treating his stomatitis.

“Excuse me. Could you please let me out?” Garrus was exceptionally well-behaved in the carrier to and from the vet.

He gained 0.6 lbs in three weeks and needs to gain 0.5-1 lb to be at a healthy weight. We’ve been able to give him, on average, at least one can of wet food a day. If he’s a particularly hungry Garrus, he will eat up to two cans in a day. Like Boudicca, he’s a little persnickety about how his food is presented (because it’s easier to eat): he likes it well chopped, fluffed, and room temperature. We indulge him because we want him to eat, be healthy, and be a happy cat. 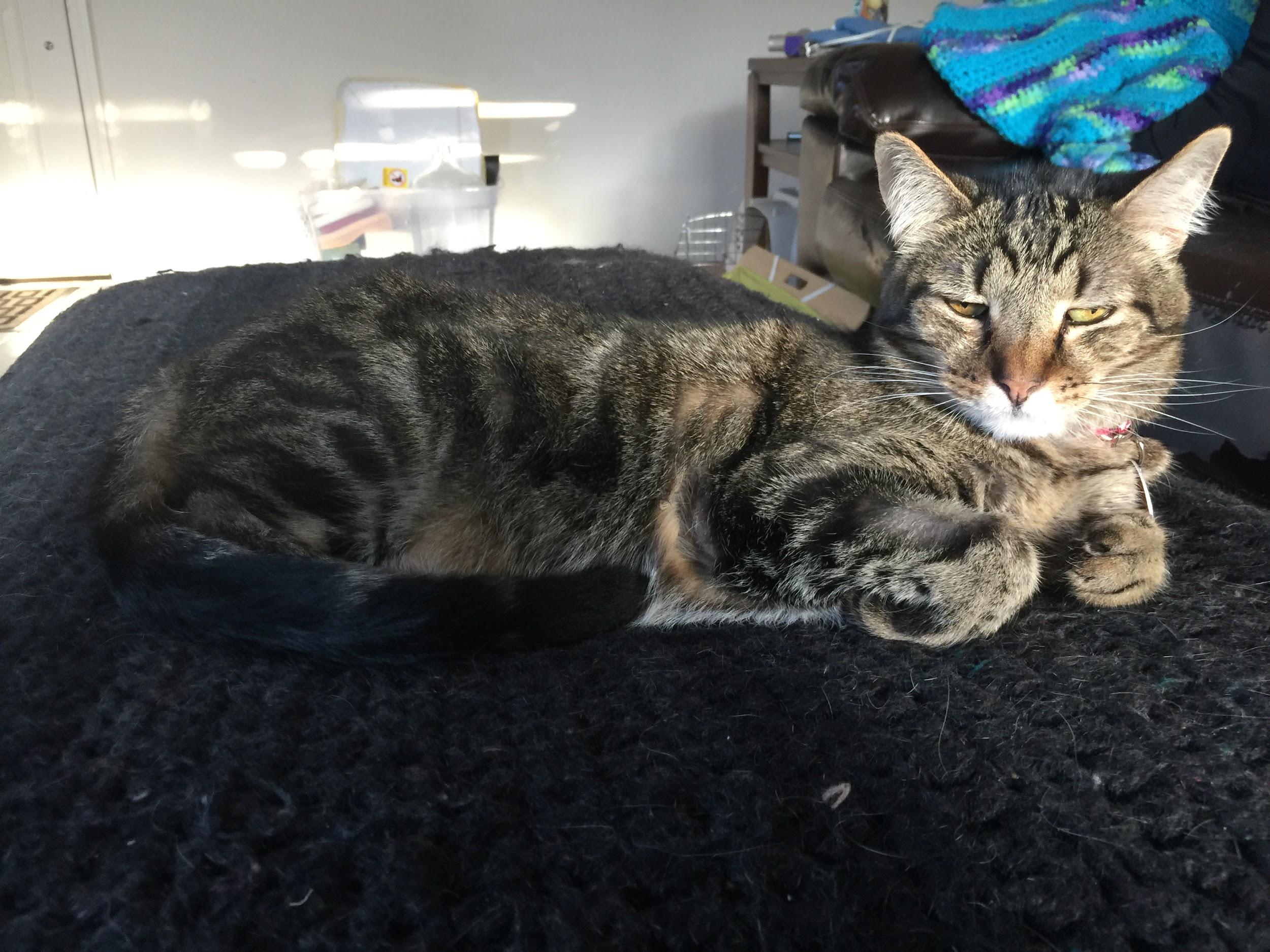 For the last month we also gave a dose of Zylkene in his food. We had suspected that he had developed food anxiety as a result of being bullied for food by his previous housemates, and dealing with dental pain from stomatitis exacerbated this. We noticed that the boys acted a bit uneasy after Boudicca passed away, and Dr R explained that this was due to the social hierarchical dynamic shifting. By nature, Garrus tends to be a submissive cat; Charlie, while not a dominant (“bossy”) cat per se, is the most intense cat in the household now. Dr R suggested that we try Zylkene for a month or so to help both cats settle and relax. In our experience, it helped. Garrus in particular became more affectionate and faffed about less at meal times.

Garrus enjoys claiming Aaron’s pants as a bed and gives me side-eye when I take a photo. 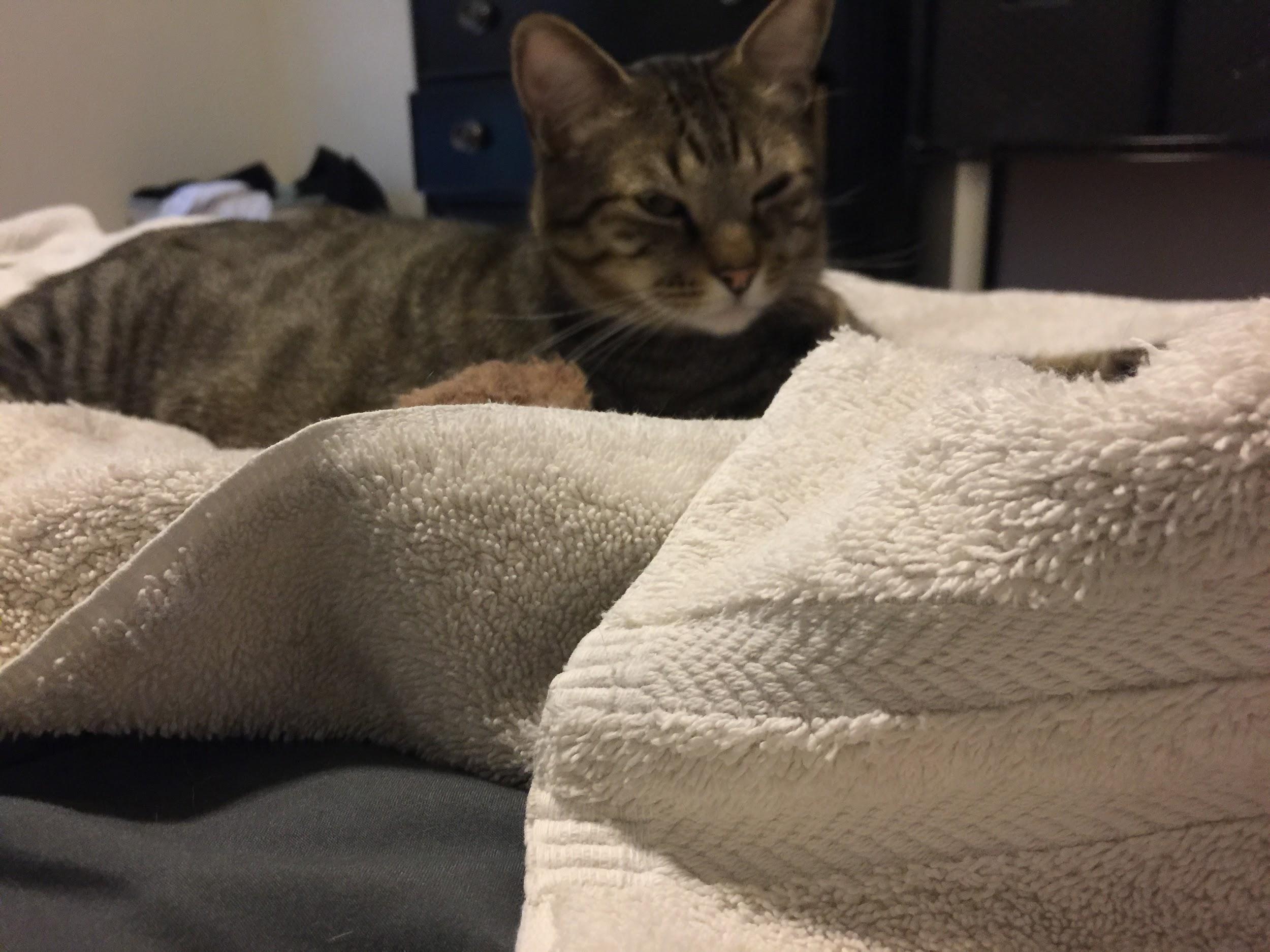 Wherever Garrus is, Charlie often follows, sometimes bringing a toy with him. Here he claimed a towel as his lounging spot and slow-blinked at me, purring.

Over the last couple months Garrus has made huge progress in becoming less wary, engaging more with us, and generally relaxing. He now asks for visits several times a day, purrs and slow-blinks regularly, lets me touch his paws, dances around our legs and feet, and gives tail hugs–and not only to get food! He even talks a little in this soft, vaguely squeaky meow, but he typically only meows when his wet food is being prepared. (I believe Charlie has rubbed off on him.) 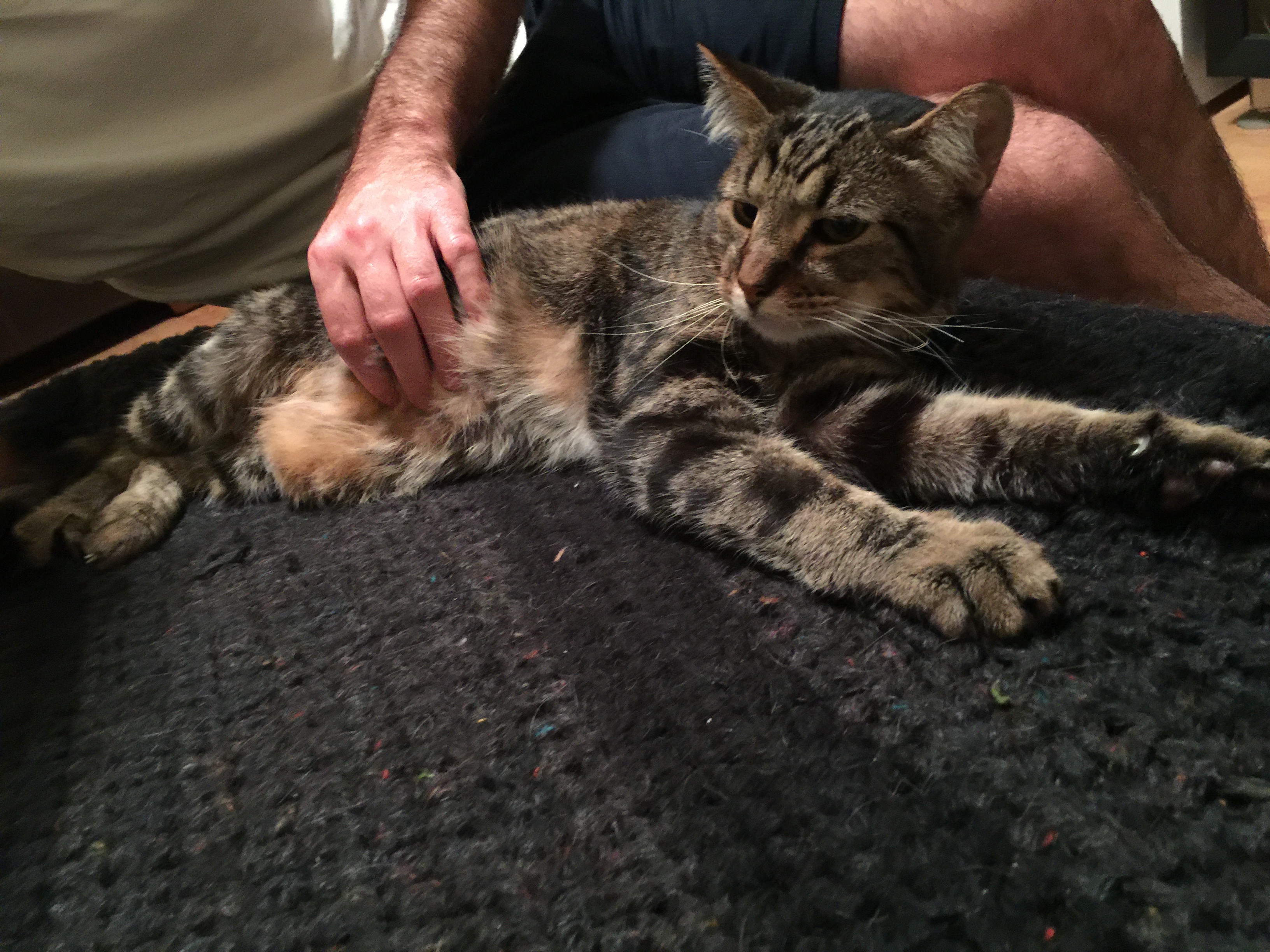 Aaron and I found Garrus sprawled on the ottoman yesterday evening. You can see what a long, stretchy, and handsome cat he is. Naturally we had to visit. He seemed to enjoy all the rubs and let both of us pet the delightfully fluffy fur on his belly.

I managed to snap this photo just as Garrus began to yawn. Here he looks like he is roaring!

I know it’s a bit blurry but I laughed when Garrus got up and stuck his face right up against the camera. “Alright Mr. Deville, I’m ready for my closeup…”