After we bring our cats home from the vet, it’s normal for them to want to decompress and sleep. It’s also somewhat expected for them to feel a bit “off,” especially if they’ve been prodded or poked with needles, as they were when they were given their vaccines.

After we brought them home from the vet, their usual post-vet routine was thrown off. Since Monday was a holiday and Aaron had time off from work, we had scheduled our back door to be replaced. (We also scheduled the vet appointment for earlier that morning so that both Aaron and I would be available to usher cats into carriers.) We anticipated that the work would be noisy and, since the entire door would come out, we needed to confine the cats for their safety. We put Boudicca in my office with a litter box, food, water, and her comfy box bed. We put Charlie in our bedroom with access to food, water, and the Cat Genies in the master bathroom.

Our original plan was to confine Garrus along with Charlie since we knew that the boys enjoy one another’s company. We tried different tactics to catch Garrus or convince him to go into the bedroom but he was not having any of it. He planted himself in the lower cat condo on the tower and refused to budge. Rather than causing further stress by having to pry him out of there, we simply hung out next to the cat tower and made sure he did not venture out while the work was being done. Once the noise started, Garrus might have regretted not going into the bedroom. He gave us a mildly displeased face with some side-eye, but he gives us this same expression whenever his nap is interrupted.

Thankfully, the door was replaced in two hours. However, during that two hours, we realized that something was up with Charlie. We periodically checked on both Boudicca and Charlie and offered them comfort and love. Boudicca, although not happy about being confined in my office, was fine. Charlie, on the other hand, was on the bed giving me anxious, sad eyes. I checked in the bathroom and saw that there was a big mess to clean up. Charlie was definitely feeling gunky.

At first we thought it was a stress reaction in response to being at the vet and perhaps also by the noise from the door being replaced. As the day progressed, we noticed that Charlie was not acting like his normal happy-go-lucky self. He was noticeably subdued, quiet, and appeared to be ill at ease. It was also evident that his appetite had decreased. When he tried to eat in the afternoon, he threw up again. The next morning, we woke up to hear him crying in a Cat Genie, followed by an unpleasant squirting sound. He had diarrhea. More cleaning up and TLC applied to kitty.

I got worried. I had never seen this type of reaction in a cat following getting a vaccine. I did look it up and found that cats can have adverse reactions to vaccines. Sometimes it manifests as itching or sneezing. Other times there is swelling at the injection site. Still other cats react by vomiting or with diarrhea. This is what appeared to have happened to Charlie.

Compounding my worry is that on Tuesday, much of Central Texas was effectively immobilized by a strong cold front that resulted in sleet, ice, and, in some areas, hail. The storm began on Monday night. We had been strongly advised to stay off the roads. Schools from San Antonio to Houston were closed on Tuesday, as were many businesses and city departments. My vet’s office was open, however. As they always do after an appointment, a tech makes a follow-up call to check on the pet or pets seen at the office the previous day. While I was happy to report that Boudicca was fine, I described Charlie’s symptoms and the tech agreed that it was likely a reaction to the vaccine. She offered me two options: I could bring him into the office or I would wait and monitor him at home.

I, for one, did not want to venture out onto icy roads. I also did not want to submit Charlie to further stress by taking him back to the vet unless it was absolutely necessary. I decided to monitor him at home. He was not constantly vomiting nor was his diarrhea severe. We had seen him have a drink of water at least once. If he was not eating or drinking at all, or his vomiting or diarrhea was much worse, I would have reconsidered.

Charlie was quite happy to be reunited with his buddy after the construction on the back door ceased. Garrus did not seem willing to give up his spot in the condo so Charlie made do beside him.

Throughout this whole experience, Garrus often paced and seemed anxious. He kept giving me this reproachful looks, as though saying, “Excuse me, human parental units. There seems to be something amiss with my companion. Could you attend to his needs, please?” Since Charlie was not hanging out in his usual spot, Garrus apparently took it upon himself to save it for him and superintend things from his perch on the uppermost platform on the cat tower. 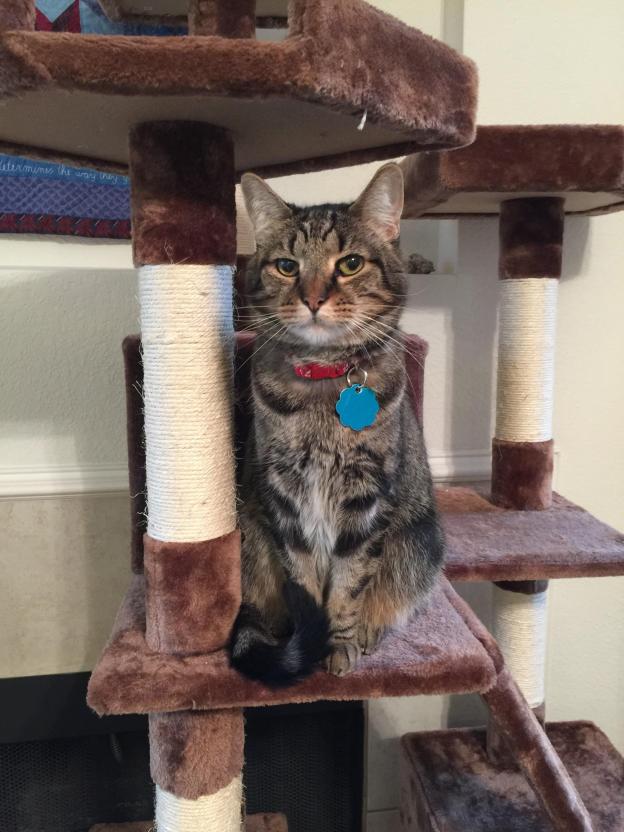 Garrus always sits so tall and regally but I felt here, especially in his expression, that he gave off a hint of sarcasm as well.

“Madam, why are you taking my photograph? I have important business to attend to while I am up here. I must get on.” –Garrus 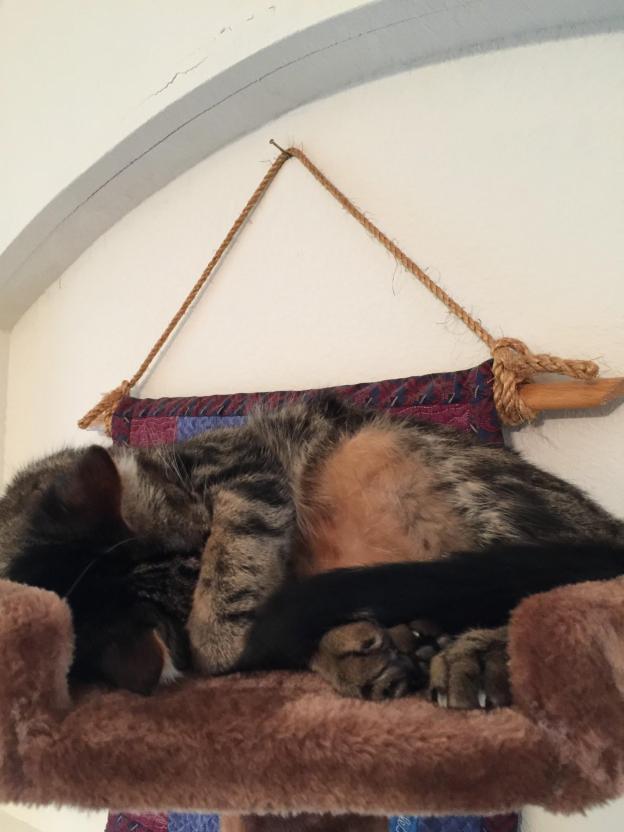 I could not resist taking this photo because Garrus was being SO CUTE.

Later Charlie moved from the chair in the living room to our bed. We found Garrus being very sweet with him, grooming Charlie occasionally and snuggling with his buddy for hours. This seemed to help Charlie relax and feel better. We, of course, visited both boys and gave them love but we also wanted to let Charlie get enough sleep. The boys’ routine had been thrown off by Charlie being sick. Only Boudicca, who remained Miss Oblivious throughout this affair, was perfectly content to camp out on the couch and snooze without concern. 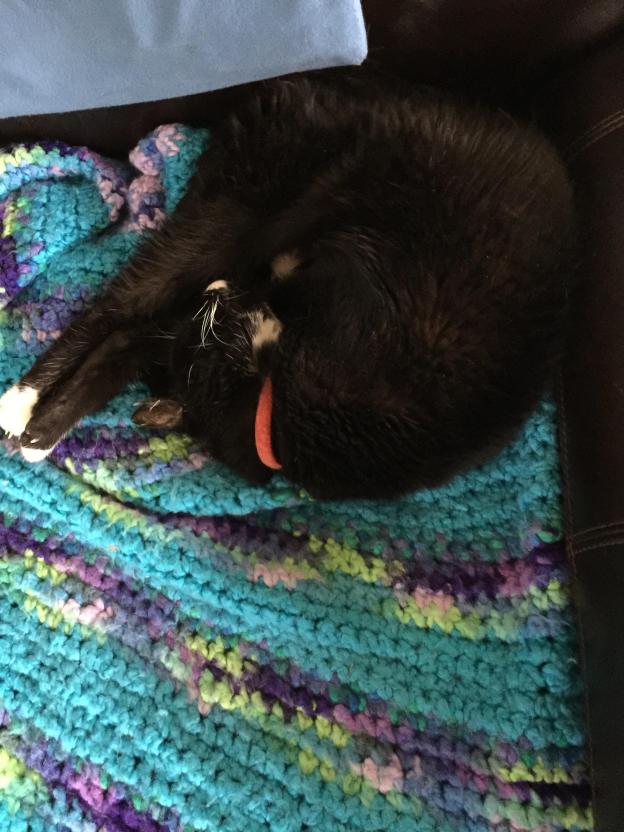 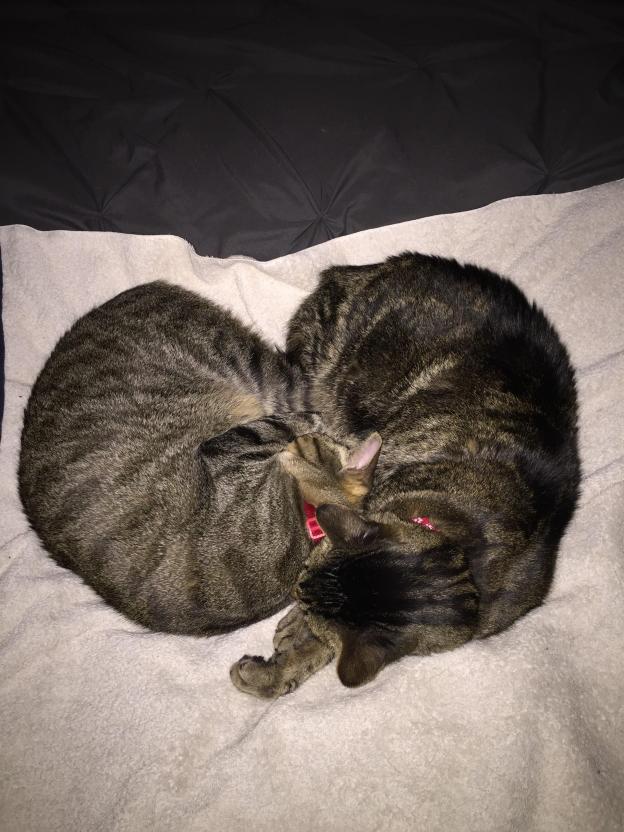 The boys made a heart shape while cuddling. Cue the Aww factor.

Late Tuesday afternoon Charlie seemed to perk up a bit. He ate a little of his kibble and kept it down. That evening, when Aaron and I sat on the couch, I had Boudicca in my lap. This is our routine. Charlie asked if he could come up and sit on the pillow beside me. Of course I let him, and we had a lovely visit that involved many pets, polite snuggles, and much purring. I was quite pleased by this since I had not heard him purr all day. Garrus came up on the back of the couch for a bit then later enticed Charlie to play with him for a short while. We noticed that this play session wasn’t as vigorous as usual and did not involve much chasing or scampering. Garrus, who generally does not roughhouse, was being quite gentle but definitely persistent in inviting Charlie to move and play. This seemed to do Charlie some good. The boys did turn in early and resume their snuggling as they napped. Charlie slept at the foot of the bed for most of the night.

This morning the ice had melted and Central Texas started moving again. Both Charlie and Garrus wanted to visit us in bed and both purred loud. Not too long afterward, this is how I found the boys…

Look how cute they are. BEHOLD THE CUTENESS.

The vet’s office called to check on Charlie as well. He has been able to eat and hasn’t vomited or had any diarrhea in a day. (Of course I’ll keep monitoring him to ensure he’s completely out of the woods.) He’s perked up, chirpy, and noticeably relaxed. He is clearly happy to snuggle with Garrus and apparently finds his buddy to be the perfect pillow.

What have I learned from this experience? Cats and dogs alike can have adverse reactions to vaccines, and these reactions can vary widely. Getting your pet vaccinated in necessary and in many states required by law. However, if your pet appears to feel gunky after getting a shot, contact your vet. Do the right thing. The right thing may in fact involve a snuggle, as Charlie and Garrus frequently demonstrate.